Share on FacebookShare on TwitterShare on PinterestShare on Linkedin

Mariana Marroquin’s story starts like most other Americans. She immigrated to the United States in 1998 from her home in Guatemala seeking a better life for herself. At the time, Guatamala was killing people who didn’t fit into a strict male/female binary, which meant transgender and gender non-conforming people had to either stay in the closet or live stealth lives. Mariana and her family decided it was best to leave. She’s also a hate crime survivor, she discloses, but chooses not to look back on that experience because she believes “it’s better to look forward and keep going.”

Now, more than two decades later, Mariana is the program manager of the Trans Wellness Center, the first transgender-specific health center of its kind in Los Angeles, California and even the United States.

The road from refugee to community leader and mother of countless trans women started off in the early 2000’s in Huntington Park where Mariana passed out condoms to sex workers. As an undocumented immigrant, she didn’t have many options when it came to employment and resources were scarce. This is why she held onto her community because it was, and continues to be, the one place where she and her sisters can come together and listen to each other.

I got the chance to speak with Mariana and get to know more about her story. Who is the woman behind the Trans Wellness Center? How is she changing the world in her own way? Read on to find out.

Mariana: My day is going like every day at the Trans Wellness Center—full of challenges, full of surprises, full of hope, full of progress. As long as we have jobs and we have a place that we can call our center, we are going in the right direction.

K: It’s so inspiring to see people like you who are taking care of us—the community— when the government or other systemic infrastructures aren’t doing that work. And being an immigrant on top of that. How did you go about creating the Trans Wellness Center?

M: Well, it wasn’t just myself. The TWC has been years in the making through community members who fought for us and focused on taking care of us. Who is making decisions about our health? Who is fighting for our rights? It should be ourselves. The ones that live this life. I believe the TWC is that place where we can make decisions based on our needs, manage budgets, and develop programming that’s effective because we’ve been there. When I started years ago passing out condoms on the streets to my sisters doing sex work, I never imagined that would be the beginning of my journey and career. I never take this for granted because I have a job where I can be myself and give opportunities to other people in the community. 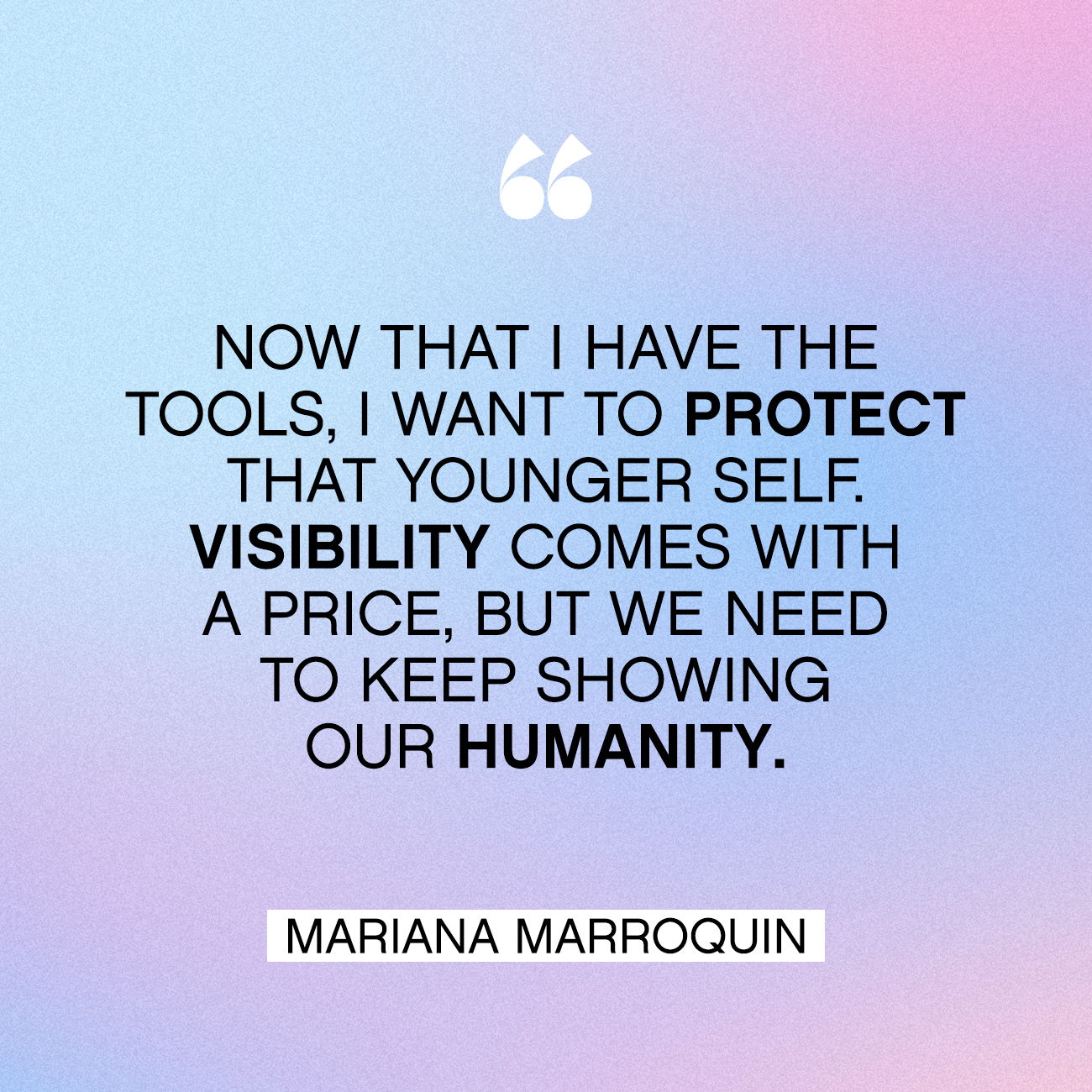 K: I know I said it before, but I’ll say it again. You’re such an inspiration to me, as someone who also immigrated to this country and had no idea about the transgender world until recently. But so many other people see you as a possibility model, and the younger generation can see themselves in these positions, whether it’s career, community, or a place in society.

M: There are many people like me and not all of us get to tell our story. There are so many beautiful stories of resilience out there. On a good day, I will open my heart and tell you everything. On a challenging day, I just want to come to work, focus on what I need to do, and go home.

It’s always dealing with that visibility. It’s not for everyone considering the rates of violence we face being visible. Just because some people are out and celebrating, doesn’t mean you have to do the same thing. You need to protect yourself because your life is beautiful. We all know what kind of risk we can take and how far we can go.

K: Looking towards Trans Day of Visibility at the end of this month, what does it mean to move beyond visibility?

M: Every time we’re more visible and tell the world who we are, we also get the horrible movements against us, especially attacks on our youth. I never imagined in my time that I would want to be different. I just wanted to blend in and transition. I didn’t want anyone to know my business. At the time, I had no hope. Now that I have the tools, I want to protect that younger self. Visibility comes with a price, but we need to keep showing our humanity.

K: Thank you for sharing that. I resonated with a lot of what you said about not wanting to be different when I was younger and being super private. Since we’re talking about visibility, I can’t not bring up social media. What are your thoughts around the micro-support groups emerging online like posts for mutual aid funds and girls asking for donations for their surgeries?

M: If someone in a very isolated area is posting and saying they need help, someone is going to hear that message and want to help them. Someone’s going to say, “I hear you.” We need to hold onto those moments. We lose a lot of community members that are never seen or heard, and that’s why we need to say it more often. Trans people, I love you. I see you. And you matter. I will never get enough of that after hearing the opposite my entire life. 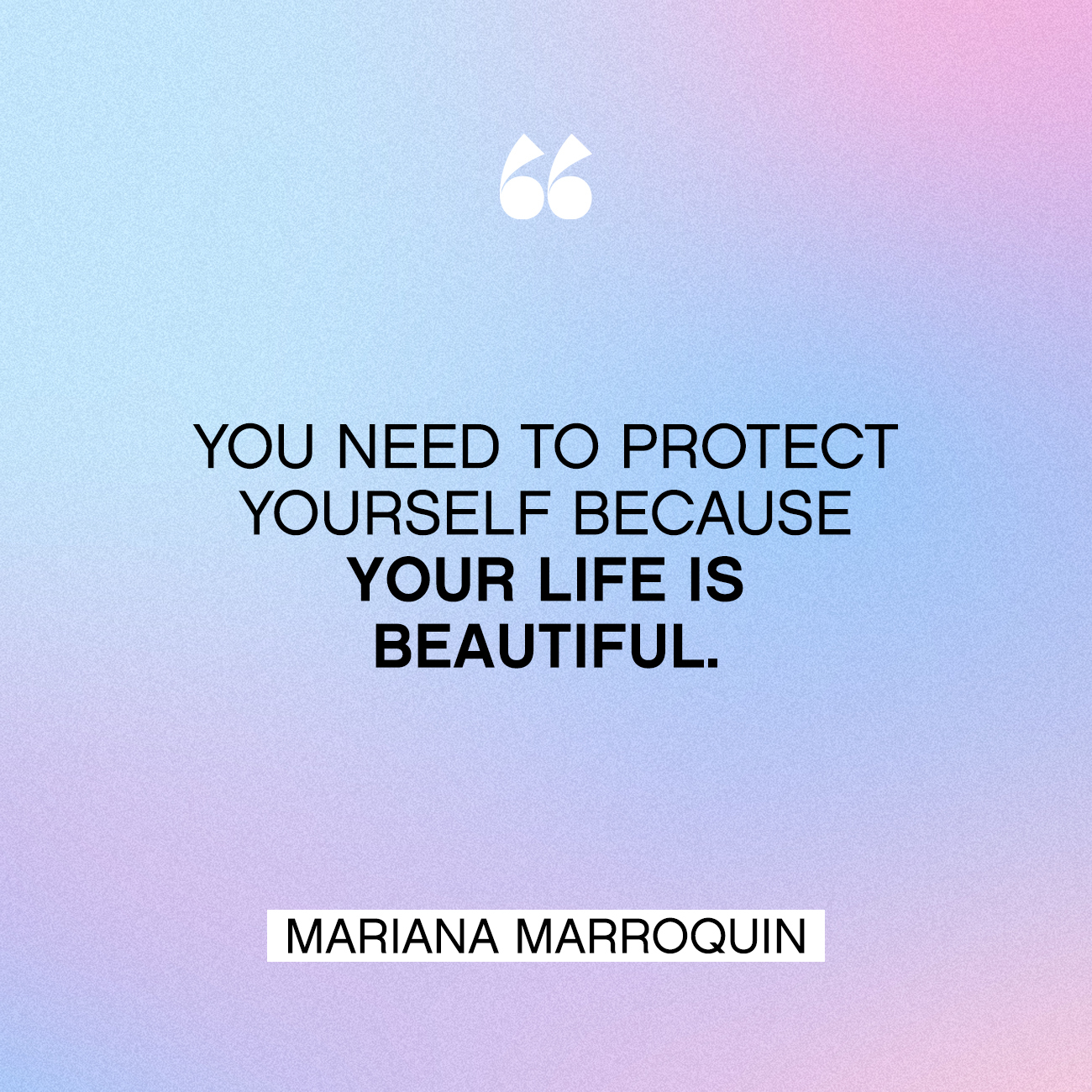 And now, to the million-dollar question: “How does Mariana Marroquin approach self-care?”